During the 1960s silver began to increase in value drastically from its historical average. As it did, the US government stopped including silver in their coins due to the increased cost of the material. By 1965 silver was not a constituent of US coins, except for in the case of specially minted coins that were sold at a premium price.

The pre-1965 coins gradually went out circulation, and these coins are now circulated amongst investors around the world as “junk silver”, a super cheap silver investment vehicle.

To remember the assassination of John F. Kennedy, a series of half-dollars containing 40% Silver were minted by the US mint. These depict JFK on them. The inner layer of the coins contains 21% silver and 79% copper, while the outer layer was made of 20% copper and 80% silver.  Following the Kennedy half dollar the US mint did not produce coins containing silver, so these were the last in circulation. 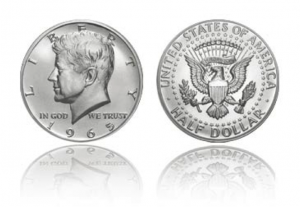 These silver Kennedys are often available in $500 and $1,000 bags, as their face value is directly correlated to the silver content in each coin. You can of course buy smaller dominations, but the more you buy the better the value you will receive. Part of the beauty of junk silver coins is that investors can buy one coin at a time if they want to, making this form of silver appealing to all sizes of investors.

Close to Spot Price of Silver

Silver Eagles, Maples and other bullion coins tend to attract much higher premiums than these coins. You can buy silver Kennedys and other 40% silver coins at rates much closer to their spot value silver weight. True silver investors look only at the price they are paying for the silver they receive, and these coins offer some of the best value silver on the market. It is even possible to buy coins below their silver spot price value on occasions of lesser demand.

Another reason that people are buying 40% silver coins is as “survival coins”. The world is in a precarious financial state. Government debt is at dangerous levels. 97% of all transactions, and money held, is in a digital form. Nations are printing more paper money and there is uncertainty flowing through the world.

Many of us have become more conscious of how invested we are in the financial banking system. Bank collapses have already materialized and highlighted in our minds our over-dependence on a broken system.  Having a stash of silver coins can provide a means of financial capacity if there is a total financial collapse.

The most common 40% silver coin is the Kennedy Half Dollar, produced from 1965 through to 1970. (The 1964 JFK coin is 90% silver). 40% coins that were minted and sold at a premium price normally have an S stamped on them to signify the fact they were a special edition. There was also a set of Eisenhower coins minted from 1971-1974 with 40% silver content, pictured below: