Silver Eagles commenced production back in 1986, and there have been over 300 million minted in the intervening years. This makes Silver Eagles the US Mint’s most abundant and successful bullion coin in their long history.

Silver Eagles are one troy ounce in weight and of purity level .999, meaning they are 99.9% fine silver purity. The legal tender value of these coins is just one US dollar. The fact that they are Government issued tender with limited annual production runs means they are sometimes described as semi-numismatic. The $1 face value of Eagles is far below the silver content plus premium value, which currently stands at around $33 (Jan 2013). This represents around a 10% mark-up above the spot silver value.

The design of the Silver Eagle is based on the “Walking Liberty” Half Dollar, minted from 1916-1947, and designed by Adolph A Weinman. The “Eagle and Shield” on the reverse was designed by John Mercanti.

The term “silver dollars” officially refers to minted silver coins from 1878-1904 and 1921-1935, so investors should be careful not to confuse these with Silver Eagles.

How Are They Sold?

Legally Silver Eagles are considered collector coins with numismatic value. Therefore, the US mint is permitted to sell these coins at higher value than the legal tender face value of $1. The US mint retails the coins in a box containing 25 20-coin tubes. These are known as monster boxes and are a popular investment with silver investors. 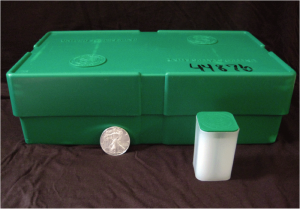 The monster boxes have a weight of ~34 lbs. The minimum order of Silver Eagles direct from the mint is 200 coins, although there are many retail investment websites that offer lower quantities and at cheaper overall prices. Larger quantity purchases tend to attract smaller premiums above the spot price of silver.

When buying American Silver Eagles it is possible to get lower premiums above spot by asking about backdated Silver Eagles. The newer ones tend to be more expensive and a good deal can be reached if you will accept the older mints. Different volumes were minted year to year so prices vary based on this too.

Don’t expect to achieve close to spot silver prices when buying Silver Eagles. They have collector value and will be more expensive. They tend to be 10%+ above spot price, but they remain a popular investment choice nonetheless.