The Austrian Silver Philharmonic is minted at the Austrian Mint, a mint that traces its origins back to 1194, when the silver ransom for King Richard the Lionheart was minted into silver coins for the Austrian Empire. The mint is now the most prolific manufacturer of gold and silver coins and bullion in Europe. It is well reputed for the skill and craftsmanship that the workers in the mint bring to the minting process.

The Silver Philharmonic coin was introduced in February 2008 due to high demand from investors. The Austrian Gold Philharmonic was the most popular gold coin in the world in 1992, 1995, and 1996, and the silver version of the coin has followed suit over the past few years. The mint does not publish official figures of their production runs, but as the popularity of this coin increases the older years will increase in value due to relative rarity.

Austrian Silver Philharmonics are the most popular silver coin from Europe. They are .999 silver purity and have a diameter of 37mm. Each coin comprises 1 troy ounce of silver, and the coins are backed by the Austrian Government which makes them extremely liquid and easily authenticated.

The Silver Phil’s design is the same as the Gold Phil. Each coin in the series commemorates the prestigious Austrian Philharmonic Orchestra, and was designed by Thomas Pesendorfer. The obverse of the coin is stamped with the German language for the Orchestra name (Wienier Philharmoniker), and one ounce fine silver (1 Unze Feinsilber). 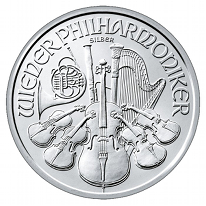 The Austrian Philharmonic has a face value of 1.5 Euros. It is legal tender solely in Austria and was the first Euro bullion coin minted in silver.

Austrian Silver Philharmonics are normally priced just a few dollars above their silver spot value, assuming they are in Brilliant Uncirculated condition. They do not attract premiums as high as Silver Eagles and Canadian Maples, but this may change in the future as the coin develops more history and worldwide demand.

Buying in Bulk and Monster Boxes

When buying silver coins it is always best to buy in bulk. Investors get the maximum returns by spending thousands rather than hundreds of dollars, as the higher the quantity bought the closer you get to spot price. 500 coin monster boxes are the best way to invest in Philharmonics (if you have sufficient investment capital to buy them), as they offer the lowest over spot pricing for the silver coins.

Monster boxes come as 25 tubes of 20 coins. The coins come from the mint beautifully packaged and provide a truly stunning investment medium.  The boxes are weighty, at around 34 pounds, but are fairly easily stored if you have enough space in your home. Alternatively they can be kept in depositories for safekeeping.

Where Can You Buy Them?

As well as buying from the mint, these coins are available on many silver websites. Online retailers, such as JM Bullion, always have them available at prices linked to spot. You can even pick up a bargain offline in coin shops or pawnbrokers. When you buy them as singles they will originally have left the mint in monster boxes before being split up.