The Royal Canadian Mint was originally serving the British Mint, but gained independence in 1931. It operates from two locations and produces billions of coins per annum.

Production of Silver Maples began almost a decade after their gold counterparts, in 1988. The Royal Canadian Mint has offered silver coins in 1 ounce, .5 ounce, .1 ounce and .05 ounce weights throughout the years, however he Silver Maples are similar in design to the Gold Maples and are always one troy ounce.

Canadian Maple Leaf Silver Coins, or Canadian Maples, are the purest silver coins available in the world. They consist of .9999 fine silver, which means they are 99.99% pure, as opposed to the more standard 99.9% purity levels of American Eagles and other bullion coins.

The Canadian Maples have a face value of $5 CAD in Canada, but given the silver is worth far more than the coin’s face value, market prices are in line with the spot price of silver and a retail mark up. The premium is higher than on silver bars, but is generally considered by retail investors as fairly reasonable.

The best way to buy Maples is in bulk through Canadian Silver Maple Leaf Monster Boxes. These consist of a well-packaged set of 20 tubes of 25 coins. The 500 coins represent good value, as the quantity means that pricing is closer to spot than purchasing fewer coins. The price will still be above spot, and not as cheap as junk silver and rounds normally are, but Monster Boxes represent an attractive and affordable investment proposition. 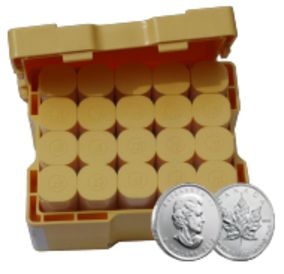 Maples Leafs are uncirculated pristine coins straight out of the mint. For many there is something special about buying directly from such a prestigious mint, as it certainly provides peace of mind that you are buying authentic silver. There are also several excellent dealers offering monster boxes of Silver Maples, such as JMBullion and APMEX.

Buying From the Open Market

The tubes of silver maples that are found on sale through shops, forums and online sites like eBay originate from these monster boxes. Tubes are perhaps the most popular way for a retail investor to buy Silver Maples, as the monster boxes are quite a substantial investment.

There is no doubt that the Canadian Maple Leaf is amongst the most esteemed and recognized silver coins in the world. When an investor decides to cash in on their coins they are assured of finding people willing to buy them. This makes both buying and selling throughout the market generally easier than with many other types of silver.

The Canadian Silver Maple Leaf has the added benefit of having the purity level, .9999, and the weight, 1 troy ounce, printed on the coin. Survivor coin purchasers, looking to buy coins for the eventuality of a currency crisis or disaster, are attracted to these coins. Due to the 99.99% purity these are often called Four 9 coins. This purity level is rarely found in either coins or bars from anywhere outside the Canadian Mint.